The United Valley Interfaith Project emerged from several congregations seeking to understand the extent of poverty and injustice in our region, and their frustration in tackling poverty and justice issues by themselves.  From a loosely-knit group of congregations in 2003 to a formal organization in 2008, the United Valley Interfaith Project has become a powerful force for collective action to enhance social justice in our region.

Since that time UVIP has worked to...

What is Community Organizing?

Community organizing groups do not provide direct services. We address the issues by listening to those most affected by the problem, researching possible solutions, bringing together various stakeholders to solve the problem, and getting decision makers to implement the agreed upon solutions. Stakeholders include businesses, faith groups, social service agencies, advocacy groups, government officials, schools and other community organizations. By involving all stakeholders in this process, the solutions arrived at enjoy wider public support. This allows community organizing groups to continually develop leaders, deepen the web of relationships within the community, and strengthen the ability to create change for the common good.

Faith-based community organizing groups bring people together primarily through their religious congregations and faith communities, as well as business associations, labor unions, residential associations, schools, community groups, and other member based organizations. While faith is a strong motivating factor for many members, faith-based community organizing groups do not advocate any particular religious, doctrinal, or politically motivated solution to the problems we address. We seek to facilitate practical and sensible solutions that take into account the interests of all stakeholders and the common good. 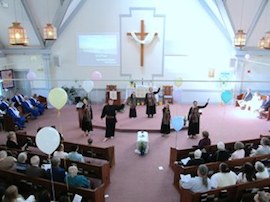 
We strive to create a place at the table for everyone. We are a reconciling... (more)