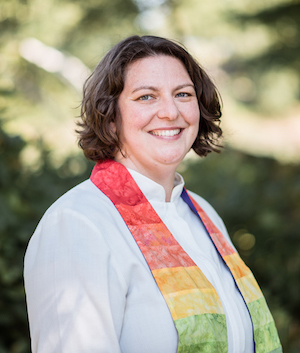 Rev. Becca Girrell (gurr-EL), in her second decade in pastoral ministry, is excited to serve God with the people of Lebanon United Methodist Church and the Upper Valley community! Becca was appointed to LUMC in July of 2014. Born in New York State, but raised almost entirely in the Northeast "Kingdom" of Vermont, Becca experienced a call to pastoral ministry while in college and attended Boston University School of Theology, graduating at the top of her class. She has previously served three churches in Castleton-on-Hudson, NY and in Plainfield (1/4 time) and Montpelier (3/4 time), VT, until Trinity UMC Montpelier VT was able to return to full time ministry with her as pastor.

Becca is mom to two wonderful kids: Arianna and William. She and Ari enjoy Taekwondo together, Ari having earned her red belt and Becca having earned her black belt. Ari is also a runner, completing two 5Ks in 2016, a budding cartoonist, and loves drama, singing, and attending protests and vigils, where she is unafraid to speak her mind. William loves trains and books, and is an excellent reader, creative thinker, and curious scientist. He's recently learned to swim really well, ride a bike without training wheels, and he is an excellent kayak paddler. Ari and William attend school in Central Vermont where their dad lives, but spend most weekends and school vacations in Lebanon where they love being part of LUMC.

Becca's spouse, Sean Delmore, works at Dartmouth College as an Administrator in the Leslie Center for the Humanities. Sean is also appointed as a 1/4 time pastor to Miller Memorial United Methodist Church in Bethel, VT, bringing his passion and love for God and humanity to all of his work. Like Becca, Sean is an adult convert to United Methodism, and very active in the regional ministry of the United Methodist Church and beyond. Sean and Becca, together with Ari and William, love the Upper Valley Community, and can often be found paddling on Mascoma Lake, exploring the Montshire Museum, snow shoeing or hiking area trails, enjoying the Lebanon Farmer's Market, or gardening and playing in their yard.

Becca's strengths in ministry including preaching, multi-sensory and multi-media worship design, and community organization and outreach. She believes in equipping others to live into their own callings for ministry as laity or as candidates for ordination. Becca is currently working on a Doctor of Ministry degree in Congregational Leadership. She loves those moments when God breaks in when we least expect it, working in and through honest and authentic engagement with one another and with the struggles and celebrations of life.

Becca is also active in Conference and denominational work, and is the Chairperson of the New England Annual Conference Board of Church and Society, and serves on the Executive Committee of the Conference Board of Ordained Ministry, where she chairs Recruitment. She is also on the leadership team of the New England chapter of the Methodist Federation for Social Action, and involved in efforts for marriage equality and reconciling ministries. Becca and Sean served on the 2012 and 2016 General and Jurisdictional Conference delegations. In the Upper Valley Community, Becca is active in the United Valley Interfaith Project (an interfaith community organizing group that works for justice including aging with dignity and a moral economy), Lebanon PUSH (Partners United for Safety and Health, an organization working to create and sustain drug-free community), Housing First (increasing affordable housing and assisting those without housing), and is passionate about advocacy with persons who are homeless and persons who are survivors of domestic violence.

Contact Pastor Becca
You can use the form on this website to email Becca, or call the church office (603-448-5478). If you'd like to talk in person, please make an appointment via email or phone so Becca can meet with you at a time when there are no other distractions.


We strive to create a place at the table for everyone. We are a reconciling... (more)